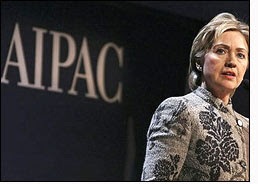 ".....However, in the context of the impending Iran attack, correcting the deliberate and thus tactical misrepresentations attributed to Ahmadinejad would be nothing less than an exercise in futility, as the political establishment and the corporate media continue to “broadcast this false statement to the masses,” as Norouzi explains, “on an almost daily basis.”

“Calling Iran a danger to the U.S. and one of Israel’s greatest threats, Sen. Hillary Rodham Clinton said Thursday that ‘no option can be taken off the table’ when dealing with that nation,” reports the Washington Post. “U.S. policy must be clear and unequivocal: We cannot, we should not, we must not permit Iran to build or acquire nuclear weapons. In dealing with this threat … no option can be taken off the table,” including the “option” of slaughtering Iranian innocents. In addition to repeating the nuclear bomb canard, Clinton exploited the baseless accusation of Holocaust denial. “To deny the Holocaust places Iran’s leadership in company with the most despicable bigots and historical revisionists,” the latter prosecuted and imprisoned in Europe for the crime of historical research, now considered “despicable” bigotry if it questions the Holocaust orthodoxy.

One cannot help but ask if Clinton is running for political office in the United States or Israel. But then, as Wesley Clark made the mistake of stating during an interview with Arianna Huffington in response to a United Press International column by Arnaud de Borchgrave, “New York money people” are providing “office seekers” with an infusion of cash. “The phrase ‘New York money people’ struck unpleasant chords with many pro-Israel activists. They interpreted it as referring to the Jewish community, which is known for its significant financial donations to political candidates,” writes Nathan Guttman.....

Since 1987, AIPAC—formerly the American Zionist Committee for Public Affairs—has increased its influence to such a degree that it runs the foreign policy of the United States, particularly in relation to issues concerning the Middle East. As the parade of above mentioned Democrat and Republican presidential hopefuls before the “money people” of AIPAC demonstrates, the lobby not only “has gained power to influence a presidential candidate’s choice of staff,” but indeed has the influence to decide presidential elections with the persuasive rattle of its “ATM for American politicians.”....."
Posted by Tony at 8:30 AM