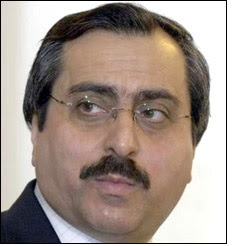 "Is it possible we are stupid enough to fall for it again?

“US officials in Baghdad and Washington are expected to unveil a secret intelligence ‘dossier’ this week detailing evidence of Iran’s alleged complicity in attacks on American troops in Iraq. The move, uncomfortably echoing Downing Street’s dossier debacle in the run-up to the 2003 Iraq invasion, is one more sign that the Bush administration is building a case for war,” reports the Guardian....

Once again, we are subjected to the discredited accusation “Iranians are smuggling into Iraq sophisticated explosive devices, mortars, and detailed plans to wipe out Sunni Arab neighborhoods,” never mind that Pentagon has done a mighty fine job of accomplishing the latter without the help of Iran.

“But as was also the case in the days before Saddam Hussein fell, powerful external forces, ranging from exiled Iranian opposition groups to leading Israeli politicians, appear intent on stoking the fire—and winding up the White House,” an unabashedly fair assessment, although it would help if the Guardian told us the rest of the story, namely the so-called “case” against Saddam Hussein consisted of a transparent passel of lies, fabrications, and fairy tales.....

“The al-Quds Force of Iran’s Islamic Revolutionary Guards is stepping up terrorism and encouraging sectarian violence in Iraq,” Alireza Jafarzadeh—a US-based Iranian dissident who is linked to the Marxist cult Mujahedin-e-Khalq (MeK), officially listed by the State Department as a terrorist group—told the Moonie, er Washington Times earlier this month. In essence, Jafarzadeh is but another Ahmed Chalabi, pedaling lies and exaggerations, the vile stuff of neocon pretext.

In the not too distant past, Jafarzadeh was happy to proffer scary stories about mullahs with nukes. Now, however, as a neocon team player, he has adopted the Iran meddling in Iraq theme, apparently the emerging rationale conjured up as a flimsy excuse to be used in the upcoming effort to shock and awe Iranian school children and grandmothers....."
Posted by Tony at 12:49 PM