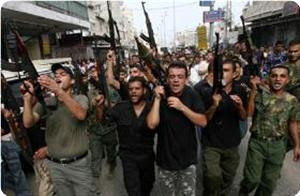 "Gaza - Palestinian security sources have affirmed Wednesday that trucks loaded with weapons and munitions were parked at the Egyptian side of the Rafah crossing point waiting to secretly cross into Gaza Strip during night in the coming two days.

According to the sources, more trucks carrying weapons and munitions have crossed the borders over the past few days and unloaded their loads at PA presidential guard’s Ansar camp, and the PA preventive security headquarters in Gaza. Both PA security apparatuses are under the command of PA chief Mahmoud Abbas.

The sources furthermore revealed that the military support came directly to Mohammed Dahalan being the leader of the mutiny trend in Fatah faction that vandalized Gaza streets and killed 33 Palestinian citizens, most of them Hamas cadres.

However, smuggling of the weapons goes under the watching eyes of the Israeli occupation government and its army in a bid to bolster strength of Dahalan’s groups in the Strip against Hamas.

A Fatah leader who preferred not to be identified had earlier revealed to the Hebrew Yedioth Ahronoth newspaper that Dahalan was building private army with full American and Israeli support and blessing.

He added that Dahalan’s private army would comprise 12,000 armed men, mostly coming form Fatah armed wings and PA security apparatuses. He added that financial support for that army comes from European countries through Abbas’ office. Military support was left to the USA and Israel, the Fatah leader asserted.

Meanwhile, spokesman of the executive force of the PA interior ministry, which keeps law and order in the Strip, Islam Shahwan condemned Abbas’ remarks on the force, adding that the force was a legitimate one being part of the interior ministry’s security force.

During a press conference in Egypt Tuesday, Abbas alleged that the force was illegitimate.

“We have documented papers with Abbas’ signature proving that the force was endorsed by the PA chief himself, and we have distributed copies of the endorsement to media apparatuses. This is clear tampering of the law on the part of the PA chief”, said Shahwan in refuting Abbas’ remarks."
Posted by Tony at 9:09 AM