The Twilight Zone / By the book 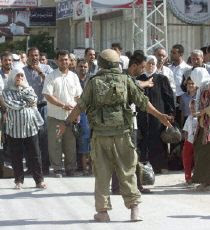 Life and death are in the hands of the checkpoint, yet everyone is just following rules.

"There's no question about it - everything was done by the book. The gate was locked at 7 P.M. and 16,000 people, residents of the villages of Beit Furik and Beit Dajan, were imprisoned behind it until 6 A.M. That's the procedure. A woman who wants to cross the checkpoint at night has to go on foot, to wait until a female soldier comes to do a body check, even if she is about to give birth; that, too, is procedure. And only cars with permits are allowed to enter Nablus, even if dying people are sitting inside them; that is also according to procedure. No soldier deviated from the procedure, everything was done by the book, the book of the occupation.

That is how it happened that a cancer patient was delayed for about an hour and a half at the Hawara checkpoint, until he died in a taxi that was not allowed to enter Nablus, a taxi in which he was trying to get from the hospital to his home, his final request. That is also what happened when the young woman in labor was forced to stand in the cold and the rain for about half an hour and to make her way on foot for several hundred meters while in labor. That's the procedure......"
Posted by Tony at 2:48 PM