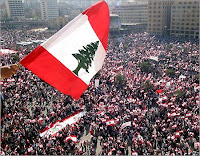 "The crisis in Lebanon is rapidly accumulating the potential to plunge the country in a second civil war, while Israel is closely watching on the sidelines for the right moment to exploit the ensuing security vulnerability and finish the Lebanese divide off by intervening militarily to conclude what it officially describes as the “inconclusive” war last summer. Meanwhile, the most influential external potential mediators, regional and international, are more or less part of the crisis than they are part of the solution and pre-empting possible mediation efforts......

The Israeli occupation, the ensuing Syrian alarm and the emergence of the Hizbullah-led Lebanese resistance were Iran ’s gateway into Lebanon . Iran’s negative and passive performance in Iraq vis-à-vis the American occupation and the Iranian convergence of interests with this occupation vis-à-vis the Iraqi national resistance, dubbed by both as “terrorist,” explicitly indicates the Iranian role in Lebanon as having more to do with regional plans than with credible solidarity with the Lebanese resistance.......

The status quo in Lebanon is also threatening to disintegrate its national security system. The national army and the security forces are preoccupied with the mission of preserving their neutral unity, which in any time now could prove impossible amid a snowballing national divide. “True the army is suffering from pressure … The army has been bearing above its load for months,” the commander General Michel Suleiman told As-Safir newspaper. At the same time Hizbullah, the backbone of the national defense against the Israeli looming threat, is preoccupied with a national-political crisis that is driving the country into the brink of a second civil war. Both parties to the crisis are becoming more vulnerable and less immune to resist the external factors and their internal extensions, which are pushing the divide towards its inevitable conclusion.

The crisis is creating the exemplary environment for a successful Israeli military intervention. On January 23 the Associated Press reported an Israeli military drill the previous day on a mock Arab city in the Negev desert complete with mosques, apartment buildings, even a faux Palestinian refugee camp, built on eight square miles with the help of the U.S. Army Corps of Engineers. The AP quoted a veteran of the war on Lebanon , Sgt. Shalev Nachum: “We're definitely training for the next war. Next time, it will be different.” The $40 million Urban Training Center was unveiled to coincide with naming a new Israeli army chief of staff, Gabi Ashkenazi.

Ashkenazi is a veteran of Israeli wars on Lebanon , commanded major operations in the invasion of 1982 and oversaw the eventual withdrawal of all Israeli occupying forces from south Lebanon in 2000; he replaced Dan Halutz, who resigned after criticism of his handling of the war on Lebanon last summer. Ashkenazi’s “mission,” according to AP, is to “restore Israel 's deterrent posture and public confidence, both dented by last year's costly and inconclusive Lebanon war.” Israeli Prime Minister Ehud Olmert and “Defense” Minister Amir Peretz “expressed confidence in Ashkenazi's ability to … implement the lessons from the war in Lebanon ,” said a government statement announcing his appointment.

Israel is wasting no time to redress what she considers the 2006 “inconclusive war” on Lebanon . The determination of all the Lebanese parties to the crisis to emerge winners in a divide that if continued will only condemn all of them as losers is a determination to make the Israeli “mission” much easier. Their national consensus on national unity as the only way of survival is also the only background on which potential mediation efforts could take off to neutralize the adverse external factors, avert a civil war and at least make the price of a new Israeli military adventure too high to have a “decisive” instead of an “inconclusive” conclusion."
Posted by Tony at 7:50 AM