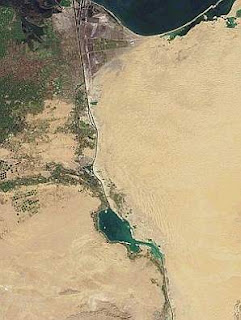 "A US Navy strike group led by the assault ship USS Bataan steamed through the Suez Canal on Tuesday on its way to join the buildup of American forces in the Middle East.

The Bataan, which entered Egyptian waters Monday, spent the night at the Mediterranean harbor of Port Said and was expected to leave the Egyptian part of the Red Sea later Tuesday, a Suez Canal official said, speaking on condition of anonymity as he was not authorized to speak to the press.

The seven-vessel Bataan group includes 2,200 US Marines and sailors, helicopters and Harrier fighter jets, the Navy said in Bahrain.

The US Fifth Fleet, which is based in Bahrain, will be overseeing around 50 warships in the Mideast after the arrival of the Bataan and an American aircraft carrier group in February, said US Navy Lt. Cmdr. Charlie Brown.

The Fifth Fleet normally commands a fleet of about 45 ships, about a third of them from US-allied navies, Brown said.

The Navy is in the midst of a regional buildup, with the group of the aircraft carrier USS John C. Stennis on its way as well as 21,500 US soldiers being sent to Iraq. The carrier USS Dwight D. Eisenhower is already in the region.

The United States has not had two carriers in the Mideast since the US-led invasion of Iraq in 2003.

The Bataan will join a second amphibious assault ship, the USS Boxer, which was on port visit in Dubai on Tuesday.

Brown said the Pentagon recently extended the tour of duty of the Boxer's US Marine Expeditionary Unit, which is in Iraq.

The Bataan is on a routine six-month deployment to the region to conduct "maritime security operations" which includes boarding and searching ships suspected of carrying terrorists or nuclear components to Iran, the Navy said."
Posted by Tony at 4:26 PM