The American proxy war in Gaza 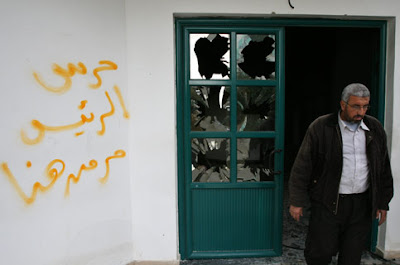 A Palestinian man walks through a damaged building next to graffiti reading, "The Presidential guard walked through here" inside the Islamic University after it was attacked in Gaza, 3 February 2007.

An Excellent Article
By Ali Abunimah, The Electronic Intifada, 3 February 2007

".....In the fevered minds of Bush administration ideologues, Palestine has become another front in what they conceive of as a new Cold War against "Islamofascism." They see Iran as the central target and proxy battles are being waged against a phantom enemy from Afghanistan and Pakistan, through Iraq into Palestine, Lebanon, Somalia and ever onwards wherever Arabs and Muslims are to be found. In every case, local conflicts with specific histories are being escalated and marshalled into this grand narrative .

Mahmoud Abbas and Gaza warlord Muhammad Dahlan have become the willing proxies for the Palestine franchise of this wider project, as their tactics and loyalists' statements reveal......

Yet the fact that the Presidential Guard is receiving arms via Israel is common knowledge to Palestinians in Gaza and the West Bank and has been talked about openly in the Israeli media for months. Since October, eight truckloads of AK-47 rifles and machine guns and several million rounds of ammunition have entered Gaza from Israel through the Nahal Oz and Kerem Shalom crossings, according to a high-ranking officer of the Force-17 Fatah militia who conveyed this information to Hebron-based journalist Khaled Amayreh. Not all these guns go solely to the Presidential Guard; many are sold on to the highest bidder.

And just days ago, President Bush announced that he would transfer $86 million dollars in the near future to further boost Abbas.

In order to change the subject from the scandal of the Palestinian "presidency" receiving US arms through Israel to use against the Palestinian people, the Presidential Guard launched a counterattack against the Islamic University in Gaza shelling, burning and destroying parts of it. Abbas' officials claimed that their forces had arrested seven Iranian weapons experts working for Hamas, and labelled Hamas leaders "extremists" and "putschists." Fatah and Fatah-backed local radio even accused Hamas of burning down the Islamic University themselves in order to blacken Fatah's 'glorious image.' The allegations about Iranians were universally dismissed but they revealed the extent to which Abbas officials have adopted the Israeli and American paradigm as their own.

In several recent demonstrations, Dahlan loyalists have shouted "Shia, Shia," at Hamas supporters. This was perhaps supposed to draw attention to Iranian support for Hamas (the movement, like the rest of the Palestinian Muslim community, is Sunni) but this hateful sectarian incitement, hitherto unknown in Palestinian society, serves (for now) the wider strategic agenda of Abbas' and Dahlan's sponsors.

After Hizbullah defeated Israel last summer, the Lebanese Shia movement, backed by Iran, gained enormous prestige among the region's people, especially Palestinians, as an Arab nationalist and pan-Islamic movement, standing firm against Israeli aggression, in contrast to toothless, unpopular and corrupt governments. Hence the active promotion of Sunni fear of their Shia brethren is designed to limit the influence of Iran -- and serve up a good old-fashioned dose of divide and rule.....

Abbas is at last doing what Arafat was always urged to do, while Israel and the US watch with glee. As Ha'aretz explained, Israel felt no need to launch a large scale revenge operation against Gaza following the January 29 Eilat bombing: "When Fatah and Hamas are so good at killing each other, why should Israel intervene and spur them to close ranks against the common enemy?".....

The Quartet even "welcomed" US arming of the Presidential Guard, though in diplomatic doublespeak this was euphemized as "efforts to reform the Palestinian security sector and thus to help improve law and order for the Palestinian people."......

Israeli and American propaganda, now also adopted by the European Union, attempts to obscure the basic understanding that Palestine is the struggle of a colonized people for liberation. The policy of supporting a quisling group to fight as a proxy on behalf of empire, colonizer and occupier will only increase the bloodshed. But it will ultimately fail in Palestine as it did before in Northern Ireland, Southern Africa and Central and Southern America, and as it is failing in Iraq."
Posted by Tony at 2:19 PM