The writing's on the wall for Iran 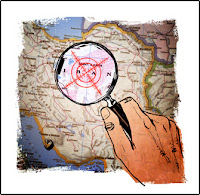 "......So it's not surprising that journalists and pundits who continue to follow their professional instincts are experiencing a certain sense of deja vu as they begin to wonder these days whether Bush and his aides are planning to expand the current war in Iraq to Iran (and Syria). The initial source of this "urban legend" was Bush's infamous "axis of evil" speech, in which he lumped Iran together with Iraq and North Korea as deserving US punishment.

The speech was followed by various pledges, including public statements, press leaks and even the commitment of US financial resources to "export" democracy to Iran. And in the aftermath of ousting Saddam from power in Baghdad, there were even a few hints here and there about "regime change" in Tehran. Interestingly, the Bush administration denied press reports about Iranian attempts to negotiate a diplomatic deal with Washington over Iraq, Lebanon, and Israel/Palestine.......

The sense of alarm perpetuated by the Saudis was reinforced through press leaks suggesting that the members of the hawkish wing of the Saudi royal family, led by former ambassador to Washington Prince Bandar bin Sultan, were gaining strength, and that the Israelis and the Saudis, backed by Washington, have been conducting secret talks to coordinate the anti-Iran strategy.

Indeed, according to Israeli press reports, Olmert and Prince Sultan have met to discuss Iran and related issues. The meeting and other signs of coordination on Iran among Washington, Jerusalem and Riyadh have raised the possibility that the Bush administration is trying to draw the outlines of a new strategic consensus involving it, Israel and the pro-US Arab-Sunni regimes (Saudi Arabia and the other Arab Gulf states, and Egypt and Jordan).

These reports recalled a similar "strategic consensus" that evolved in the 1980s during the Ronald Reagan administration, when the Americans, Israelis and Saudis - and, yes, then-US partner, Saddam's Iraq - were cooperating in dealing with both the Soviet invasion of Afghanistan and with the challenge from revolutionary Iran.

And anyone who knows how to assess the balance of power in Washington will tell you that when the Americans are joined by the Saudis and the Israelis and their powerful supporters in Washington in a coordinated effort to harm you, run fast for cover. Both the Soviets fighting against Osama bin Laden and his mujahideen allies (assisted by Washington) in Afghanistan and the Iranians attacked by Saddam's Iraqi military (assisted by Washington) learned that lesson in the 1980s.

In addition to the pressure exerted by the Saudis and Israelis on Washington, Bush in his January 11 speech blamed the Iranians for targeting US troops in Iraq and threatened to use US military power to disrupt such actions. The next day Bush announced that he was sending an aircraft carrier to visit Iran's neighborhood, and the military ordered US troops to raid an Iranian consulate in the Iraqi Kurdish city of Irbil. Such actions could lead even a low-level intelligence analyst to see "signals" coming out of the White House aimed at Iran......

But Bush-Cheney and their neo-con advisers may have found a way to overcome the threat of congressional and Democratic opposition, and it has to do with the potential Israeli role in a crisis with Iran.

If Israel decides to attack Iran's nuclear sites, many of the same lawmakers would probably applaud the move, a reflection of their pro-Israeli disposition. After all, can anyone imagine Democratic presidential candidate Senator Hillary Clinton bashing the Israelis on the eve of the primaries or the general election?....."
Posted by Tony at 4:52 AM