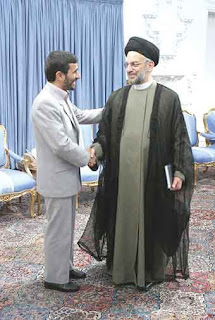 "The bad news for the “1938″ crowd — the bomb-Iran alarmists led by Benjamin “Newt”-anyahu (who seems to have learned from Gingrich that a discredited crank can still get headlines by yelling “the sky is falling and nobody is doing anything about it”) and the Washington neocons, is that Iran is refusing to play the “clear and present danger.” Indeed, if things carry on this way, it’s going to get a lot harder to make a case for war.

Then again, as we know from Iraq, a war doesn’t really need a case. The Washington Post reports that the U.S. has already launched a dirty war against Iran inside Iraq, giving its troops license to execute Iranian operatives there. And, not surprisingly, two of the Administration officials quoted in the story compare Iran to Nazi Germany. The neocons and the Likud demagogues clearly see this as their most potent rhetorical tool — a connection made in the public’s mind by connecting it with the foolish antics of Iran’s own populist demagogue President Mahmoud Ahmedinajad.......

The irony is that while the Administration’s most discredited hawks will try, however improbably, to suggest that Iranian “meddling” is the reason for Washington’s failure in Iraq, the reality may be that U.S. efforts to confront Iran on Iraqi soil, against the wishes of the majority of Iraqi leaders, may actually hasten the demise of the U.S. project in Baghdad."
Posted by Tony at 8:43 AM