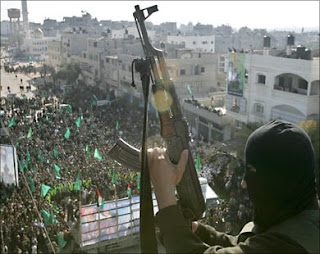 "......That said, one should not succumb to the analysis that puts the entire blame for this unfolding drama on the active Cold War between the US and Iran. In Lebanon, for example, sectarianism and factionalism, similar to Iraq’s sectarianism and tribalism, has rendered the country nationally fragmented and hardly possesses the necessary requirement of a nation state, where allegiance is made to the state, not to a sect, clan or tribe. The same is true for the Palestinians, where corruption is rife and disunity has been the longest defining factor of the Palestinian political temperament. While plenty can be said as of how physical fragmentation has lead to national disintegration in Palestine, and how many Palestinian groups, willingly or otherwise, served the interest of regional powers, the truth is that the Fatah- Hamas clash was forthcoming and preceded the US’s ongoing blunders in the region. The US-Israeli backing of Fatah merely exposed the perpetual weaknesses that have marred Palestinian society for generations, by providing political, financial and military requirements to intensify the fight so that Palestinian resistance against the Israeli occupation might fizzle out, an evident outcome of the current fighting.It is indeed more than disheartening to see that Palestinians have themselves surrendered readily to the Israeli and American designs, allowing their revolting factionalism to morph into a near civil war which has already harvested many lives. Those responsible for the violence — blame that can no longer be placed on a cluster of individuals — must have forgotten that their infighting is taking place in an occupied land, besieged by Israeli fences and walls, and under the watchful eye of Israeli intelligence, who must be brimming with glee as Palestinians are shamelessly slaughtering one another, a job that has for a long time been reserved for Israel, and for Israel alone."
Posted by Tony at 8:52 AM