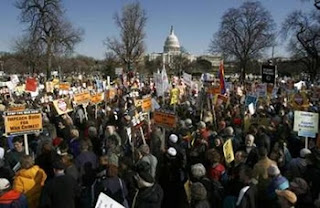 "Anti-war protesters filled the streets of Washington on Saturday in one of the largest protests since the invasion of Iraq. Veterans and military families joined lawmakers, peace groups and celebrities to urge Congress and President Bush to bring the troops home now. Protest organizers United For Peace and Justice estimated 500,000 took part in the demonstration. In California, smaller rallies were held in San Francisco, Los Angeles and Sacramento. In Washington, marchers converged on the National Mall for a two-hour rally. The crowd included people who came on 300 buses from 40 states.

* Voices of protesters from around the country

* Rep. Maxine Waters (D-CA), co-founder of the Out of Iraq caucus

* Rep. Lynn Woolsey (D-CA), co-founder of the Out of Iraq caucus. In January 2005, she became the first member of Congress to call for a withdrawal from Iraq.

* Navy Seaman Jonathan Hutto, co-founder of the Appeal for Redress

To Watch, Listen Or Read The Transcript, Click Here
Posted by Tony at 7:59 AM