Former Mossad Honcho: We Are Sleep Walking Through World War Four and Don’t Even Know It 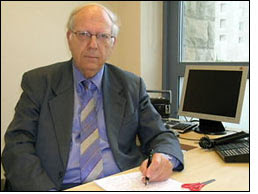 "According to Efraim Halevy, former Mossad boss, we are astride World War Three, or as the neocons call it, World War Four, and don’t know it.

“The world does not understand. A person walks through the streets of Tel Aviv, Barcelona or Buenos Aires and doesn’t get the sense that there is a war going on,” Halevy told Yedioth Internet.

Of course, this is because the supposed world war, as hyped by neocons and Israeli Likudniks, is primarily a crass propaganda contrivance, not an actual war—except for Iraqis, Palestinians, Lebanese, and soon enough Iranians.

“During World War I and II the entire world felt there was a war. Today no one is conscious of it. From time to time there is a terrorist attack in Madrid, London and New York and then everything stays the same,” Halevy continues.

Obviously, this state of affairs, this ability to ignore wars in faraway lands, is unacceptable, as peace at home usually infuriates warmongers and psychopaths. In order to violently jerk people out of their slumber, “Islamic militants” will need accomplish a “nuclear strike” in one of the above mentioned cities, never mind said extremists are not in possession of nuclear weapons and, if the experience of Iran is any indication, they won’t for many years to come........

But anyway, Efraim Halevy’s curious observation that we are walking around, oblivious to Word War Four, is yet another indication the Zionist war drums are beating more furiously as the crosshairs are drawn on Iran, even though most of us cannot hear them. Such cheesy propaganda, designed to scare old ladies and sickly children, will increase in ferocity, especially now that Iran will cooperate with the International Atomic Energy Agency, a turn that has thrown a bucket of cold water on the drive to attack Iran.

Expect more fantasies and hysteria straight ahead."
Posted by Tony at 4:18 PM