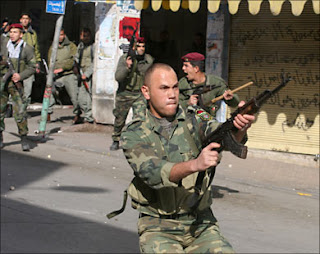 "The United States will expand assistance to Palestinian President Mahmoud Abbas to include about 8,500 members of his national security forces and possibly 1,000 Fatah fighters based in Jordan, U.S. documents show.

Providing non-lethal equipment and training to units of Abbas's National Security Forces, and possibly the Jordan-based Badr Brigade could increase Washington's role in the power struggle between Abbas's Fatah faction and the governing Hamas movement.

U.S. assistance has largely been limited until now to around 4,000 members of Abbas's presidential guard. But documents obtained by Reuters on Saturday showed that the U.S. government's $86.4 million security assistance program could cover at least 13,500 troops loyal to Abbas.

The National Security Forces (NSF) is the largest security force under Abbas's control and is viewed by many Palestinians to be the equivalent of an army, though it is poorly trained and equipped compared to the smaller presidential guard.

Under the U.S. security program, $76.4 million will fund "projects to transform and strengthen elements of the Palestinian Authority's security structure, specifically the National Security Forces and Presidential Guard in an effort to improve public order and fight terror in the West Bank and Gaza," the documents said. 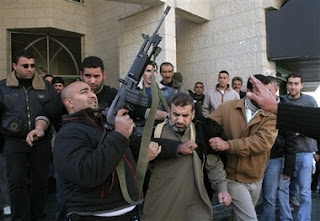 "These projects have been developed in coordination with the office of the PA president (Abbas), and the overall plan enjoys the support of the government of Israel," said the documents, marked "sensitive but unclassified."

Another $10 million would fund security improvements at the Karni commercial crossing between Israel and Gaza.

Western officials involved in the program said security service members who participate in the U.S.-funded program will undergo a vetting process to ensure they are qualified and have no ties to militant groups.

Hamas has denounced U.S. security assistance as part of a coup against its government. Hamas gunmen on Thursday attached a truck convey in Gaza that it said was meant to resupply Abbas's presidential guard, triggering a wave of fighting.

U.S. officials say they will only provide training and non-lethal equipment to forces loyal to Abbas. Guns and ammunition are being supplied by key U.S. allies Jordan and Egypt, with Israeli approval, Israeli officials say.

Under the $86.4 million U.S. program, $35.5 million will be used to provide non-lethal equipment, including riot gear and communications equipment, to about 8,500 members of Abbas's National Security Forces.

Another $15 million in U.S. funds would provide at least one NSF unit, estimated to have 668 members, with an initial six months of training to counter "civil disorder," most likely at a facility in Jordan, the documents say.

The funds will be used "in support of NSF deployment throughout the West Bank and Gaza so that the NSF may establish a visible public presence, improve public order and help improve border security," the documents said.

The United States expected other donors to provide extra training, the documents said, but gave no further details.

Palestinian officials estimate that the National Security Forces have as many as 40,000 members. Western diplomats say the number of active members is closer to 20,000.

The $86.4 million also includes $25.9 million to provide non-lethal equipment to Abbas's elite presidential guard, which is expected to grow to 4,700 members with U.S. help near-term. Palestinian officials say the force could eventually top 10,000.

The documents said up to $8 million of these funds may be used to provide equipment to the Badr Brigade, a Fatah-dominated force, "in the event of a deployment in Gaza." Badr would fall under the presidential guard's operational command.

The United States and Israel have backed a proposal by Abbas to let about 1,000 members of the Badr Brigade, into the Palestinian territories, though no date has been set.

Some analysts have warned that fighting between Hamas and Fatah could turn into a proxy war, with the United States supporting Abbas and Iran backing Hamas."
Posted by Tony at 7:33 AM