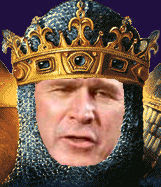 by Eric Margolis
The Toronto Sun

"Presidential State of the Union addresses often strike me as embarrassing spectacles of imperial pomp and crass jingoism unworthy of the great American republic.

They often recall Chairman Leonid Brezhnev's turgid orations to the Soviet Politburo. Watching senators and congressmen jump to their feet at every presidential cliche and applaud like clapping seals cheapens what should be a dignified event. President George W. Bush's address this week was far more sombre and subdued than his previous "bring 'em on" gasconades. He looked relaxed and confident in spite of the air of "fin de regime" hanging over Washington.

However, a new poll shows most Americans now believe Congress, not the president, should manage foreign policy. This is a remarkable sea change.

Following Bush's address, the Senate's foreign relations committee politely rebuked Bush's plans to send more troops to Iraq. A similar non-binding resolution from the full Democratic-controlled Congress is expected next week. But the real power behind Bush, Vice-President Dick Cheney, immediately sneered back, "it won't stop us." His contemptuous retort illustrates the neo-totalitarian impulses that continue to grip the Republican party's far right. Cheney and a cabal of pro-war neoconservatives are the prime exponents of imperial presidency.

The stage is now set for what could become a major constitutional crisis between executive and legislative branches.

Under the U.S. Constitution, the president, like Rome's consuls, is military leader and holds primacy in foreign policy. Congress declares war, controls purse strings, levies troops, and confirms treaties. The constitution is vague about congressional power in foreign affairs. But, at minimum, Congress speaks for all Americans, particularly in wartime, and must not be ignored.

Bush's last term marks the zenith of the long growth of the imperial presidency and decline of congressional authority. The 9-11 attacks and a docile Republican majority dominated by southern rustics and holy rollers turned Congress into a rubber stamp for Bush's policies. Most of the members of Congress have demonstrated political cowardice, moral failure and gross dereliction of their duty to defend the constitution, the nation's laws, and citizen's rights.

Hillary Clinton and fellow Democrats who now piously denounce the Iraq war eagerly voted for it in 2003 out of sheer ignorance or fear of being branded "anti-patriotic" by Republicans. In 2008, American voters will hopefully censure those legislators who voted for this faked, totally unnecessary war, and approved the administration's growing use of torture, kidnapping, and secret prisons. Never, in my memory, has Congress brought so much shame on itself, nor sunk so low.

Congress is now belatedly trying to assert itself. But its so-far timid pleadings are wrong. The constitution declares Congress the premier arm of government. It is Congress's duty to demand President Bush and VP Cheney, who have gone dangerously astray, to cease and desist. Cheney's views notwithstanding, America is not an autocracy, and he is not Richelieu.

White House defenders claim Congress had no constitutional right to interfere in the detailed conduct of war. Not so. The essence of America's political system that has been a beacon to the world for two centuries is the remarkable system of checks and balances conceived by its founding fathers to prevent the emergence of an autocrat, despot, or monarch. It is precisely Congress's duty to stop a president and vice-president who have lost touch with reality, violated the constitution, and are taking America over a cliff. Congress must cease its timidity and stop entreating the president as if he were king. He is only chief executive of the republic, one man among many. Congress is the board of directors. The president, in spite of his supporter's efforts, is not the sacrosanct embodiment of America; that role belongs to Congress.

At a time when America is reeling in defeat, and plunged in deepening confusion, Congress must roar, not whimper.
Posted by Tony at 11:38 AM