Iran: A War Is Coming 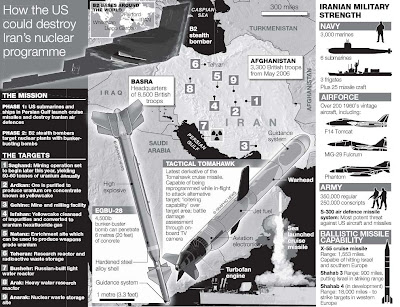 "The United States is planning what will be a catastrophic attack on Iran. For the Bush cabal, the attack will be a way of "buying time" for its disaster in Iraq. In announcing what he called a "surge" of American troops in Iraq, George W. Bush identified Iran as his real target. "We will interrupt the flow of support [to the insurgency in Iraq] from Iran and Syria," he said. "And we will seek out and destroy the networks providing advanced weaponry and training to our enemies in Iraq." "Networks" means Iran.....

As the American disaster in Iraq deepens and domestic and foreign opposition grows, "neocon" fanatics such as Vice President Cheney believe their opportunity to control Iran's oil will pass unless they act no later than the spring. For public consumption, there are potent myths. In concert with Israel and Washington's Zionist and fundamentalist Christian lobbies, the Bushites say their "strategy" is to end Iran's nuclear threat. In fact, Iran possesses not a single nuclear weapon nor has it ever threatened to build one; the CIA estimates that, even given the political will, Iran is incapable of building a nuclear weapon before 2017, at the earliest......

The "threat" from Iran is entirely manufactured, aided and abetted by familiar, compliant media language that refers to Iran's "nuclear ambitions," just as the vocabulary of Saddam's non-existent WMD arsenal became common usage. Accompanying this is a demonizing that has become standard practice......

The one piece of "solid evidence" is the threat posed by the United States. An American naval buildup in the eastern Mediterranean has begun. This is almost certainly part of what the Pentagon calls CONPLAN 8022, which is the aerial bombing of Iran. In 2004, National Security Presidential Directive 35, entitled Nuclear Weapons Deployment Authorization, was issued. It is classified, of course, but the presumption has long been that NSPD 35 authorized the stockpiling and deployment of "tactical" nuclear weapons in the Middle East.....

The well-informed Arab Times in Kuwait says Bush will attack Iran before the end of April. One of Russia's most senior military strategists, General Leonid Ivashov says the US will use nuclear munitions delivered by Cruise missiles launched in the Mediterranean. "The war in Iraq," he wrote on 24 January, "was just one element in a series of steps in the process of regional destabilization. It was only a phase in getting closer to dealing with Iran and other countries. [When the attack on Iran begins] Israel is sure to come under Iranian missile strikes. Posing as victims, the Israelis will suffer some tolerable damage and then an outraged US will destabilize Iran finally, making it look like a noble mission of retribution . . . Public opinion is already under pressure. There will be a growing anti-Iranian hysteria, leaks, disinformation etcetera . . . It remains unclear whether the US Congress is going to authorize the war."......

Can this really be happening again, less than four years after the invasion of Iraq which has left some 650,000 people dead? I wrote virtually this same article early in 2003; for Iran now read Iraq then. And is it not remarkable that North Korea has not been attacked? North Korea has nuclear weapons. That is the message, loud and clear, for the Iranians......"
Posted by Tony at 7:04 AM