Why Fisk is wrong about Lebanon 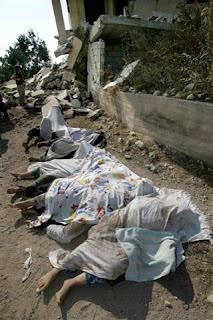 A Great Article
By Mike Whitney

"Robert Fisk is all wrong about Lebanon. The country is not on the brink of another "civil war". It's been subsumed in an "imperial war" engineered in Tel Aviv and Washington. He’s also mistaken in thinking that the Paris 3 Conference is designed to "save" Lebanon from the mountain of debt which piled up after Israel’s destructive 34 day war. The real purpose of the $7.6 billion in loans is to shackle Lebanon to the international lending institutions that are demanding additional taxes on the poor, more privatization of state-run industries, and restructuring the economy to meet the requirements of the global banking elite.

According to a recent article by Chris Marsden in Countercurrents:

"Only a fraction of the loans will be spent on reconstruction projects. Most will go towards servicing Lebanon’s short-term debt and therefore back into the coffers of the imperialist governments and financial institutions, while leaving Lebanon’s long-term debts to climb even higher. The rest will go into paying the Lebanese army (and security services) in order to suppress the opposition in the Shia areas in the south of the country. And, once again, any money given will be made conditional on the government implementing the reforms demanded by the IMF and World Bank."

This is the real war--the class war-- that continues to be directed at the people in developing world. 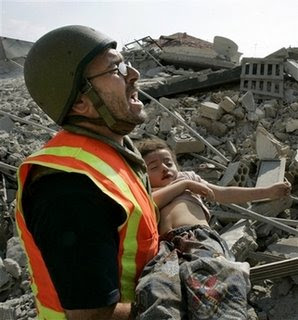 How many times have we seen the World Bank and IMF swoop down on their prey after a nation has been savaged by war only to apply the vice-grips of massive debt and set up another corporate colony? The rise of sectarianism and the "clash of civilizations" bunkum is just the mask that conceals the real struggle; the ongoing war and exploitation of the people who have no voice in government. 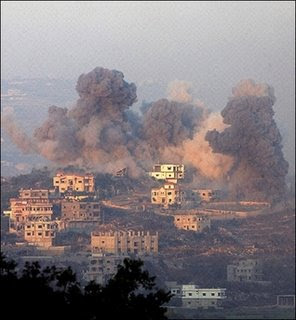 Here’s a question for Fisk: Is there any doubt now that the US and Israel used the UN to push Syrian troops out of Lebanon just so they could execute their bloody plan to invade the country and set up a puppet regime in Beirut? Or was that merely a coincidence?

And, is there any doubt that World Bank president, Paul Wolfowitz, knew that he would be used in Phase 2 of the assault on Lebanese sovereignty by providing more economy-busting loans? The US military is just the left hand of the banking establishment. One hand washes the other.

It’s the perfect system; the US-Israeli war machine flattens an entire country and then their buddies in the in the corporate-banking business rake in the profits from loans and reconstruction contracts. At the same time, they insist that the "New Lebanon" be rebuilt according to the neoliberal model; the same economic model that has kept Latin America and Africa in abject poverty for 2 decades.

Fisk is wrong; it’s not "sectarian hatred" that is driving the war, but outside powers that are using their proxies within Lebanon to achieve their geopolitical objectives. In other words, this not the beginning of civil war, but a continuation of the 34 Day war; the deliberate pulverizing of Lebanon to create an US-Israeli protectorate in a critical area of the Middle East. Future pipeline corridors and regional hegemony require a compliant pro-western government in Beirut. That’s why the Bush administration has armed and trained the massive security apparatus of Prime Minister Fouad Siniora, so he could succeed where Israel failed, by crushing Hezbollah and the pro-democracy movement.

On the other hand, Hezbollah is demanding that the Siniora respect the constitution and step down to allow for the formation of a unity government. That is what is REQUIRED under the law (after six members of the Parliament walked out, it effectively disbanded the government) and that is why Hezbollah has been camped out in the center of the city since December 1.

If the Bush administration was serious about democracy, they’d throw their support behind the opposition. (Hezbollah and Michel Aoun’s Free Patriotic Movement) But then we know what happens when the will of the people clashes with the aims of the administration. (check the war against the democratically-elected government of Hamas)

Siniora’s political base is limited to Sunnis, some parts of the Christian community, and the Lebanese business elite (Hariri). Some of them like, Samir Geagea, "the ex-civil war militia killer" are connected to right-wing extremist organizations. These are the groups who stand to benefit the most from an open confrontation with Hezbollah. Washington needs them to conceal its dirty war; a war that Bush stepped up last week when he authorized the CIA "to take covert action against Hezbollah as part of a secret plan to help the Lebanese government prevent the spread of Iranian influence. Senators and congressmen have been briefed on the classified 'non-lethal presidential finding’ that allows the CIA to provide financial and logistical support for Prime Minister, Fouad Siniora". (UK Telegraph)

Consider this: Siniora is freely violating Lebanese sovereignty to conduct covert operations against the very people (Hezbollah) who stood alone in defending Lebanon from Israeli invasion. Additionally, he is accepting this "assistance" from the United States knowing that it was the Bush administration that provided the laser-guided munitions and cluster-bombs which were used to kill Lebanese nationals just months ago. 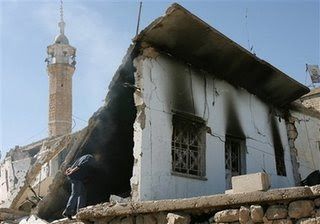 And one last thing; despite his promises, Siniora has made no effort to help the poor Shias in the South rebuilt their homes and communities. Much like the victims of Katrina, the Shia have been left to languish in the ruins created by Israel’s relentless bombing raids.

Is it any wonder why Nasrallah and Aoun want to get rid of Siniora?

It should be noted that the Bush administration sees no inconsistency in a policy that supports Sunnis in Lebanon, but Shias in Iraq. The rule of thumb appears to be: "If our actions create greater mayhem and suffering for Muslims, then we are on the right course."

Hezbollah chief, Hassan Nasrallah, has wisely ordered his people to stop their acts of civil disobedience and to get off the streets to avoid further violence. Three Shias were reportedly killed by snipers at the university. Already we can see the familiar tactics which have been used in cities in Iraq.

Nasrallah, is portrayed in the western press as a provocateur, but he has kept the peace for the last 2 months and is committed to preventing another civil war. Just days ago, he told his people, "Even if they kill 1,000 of us, we will not use our weapons against them."

He also added, "We have the political, popular and organizational strength to bring down the unconstitutional government at any time. What has prevented the fall of this government is not the support of the western powers but the opposition’s will to preserve civil peace in the country."

But it’s likely that Nasrallah will not be able to stop the fighting; already events are beyond his control. Washington is preparing to open another front in its ongoing war on terror and is looking for a showdown with Hezbollah. The neoconservative ideal of "creative destruction" is now in full-flower and has extended the conflict from the northern tip of Afghanistan to the southern coast of Somalia swallowing up an immense swath of the Middle East and Central Asia. This is the "total war" the neocons promised when Bush took office. It isn’t civil war, but the calculated destruction of an entire region by the imperial powers." 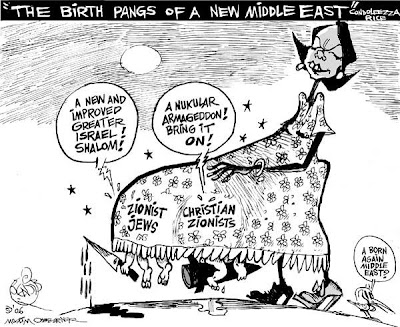