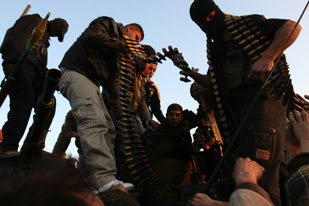 "Gun battles have erupted in the Gaza Strip between Hamas fighters and security forces loyal to Mahmoud Abbas, the Palestinian president.

Six people were reported killed and at least 70 others wounded in the violence on Thursday afternoon that tested a three-day-old ceasefire.

Hamas said its fighters ambushed what it alleged was a convoy carrying weapons to Abbas's presidential guard in the Gaza Strip.

Residents said it was the fiercest fighting in the territory since the truce went into effect early on Tuesday.

The heavy clashes were taking place outside the main entrance of the Bureij and Nuseirat refugee camps in the central Gaza Strip, security sources and witnesses said.

Al Jazeera correspondent Nour Odeh said the situation was deteriorating quickly and that people had closed their shops and gone home.

She said fierce fighting had been reported from the northern Gaza Strip and that a security compound had been razed.

Also on Thursday, Hamas said that an "Arab country" had shipped weapons to the presidential guard which is loyal to the rival Fatah faction.

He said the shipment passed into the Gaza Strip via Egypt through a crossing on the border between Egypt, Israel and the Palestinian territory.

"These weapons are intended for the presidential guard and the Fatah putschists," Radwan charged.

"Military Jeeps and shells are among these weapons which come from an Arab country, whose name we do not wish to divulge," he added.

Fatah denied having received any such shipment.

Abdelhakim Awad, a Fatah spokesman, said: "It's a slanderous accusation throwing water into the fire."

Burhan Hammad, the head of Egypt's Gaza-based security delegation, also similarly branded the allegations a "total lie" that he said intended to push bitter rivals Fatah and Hamas into an "arms race".

The two factions have been locked in a power struggle since Hamas formed a government last March after a landslide victory over Fatah at the polls."
Posted by Tony at 11:09 AM