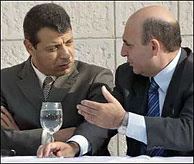 The Hebrew radio quoted General Ze’eve Boim, the former Israeli deputy war minister, as saying “If Hamas succeeded in knocking down Fatah in Gaza Strip, the IOF troops will, without hesitation, invade the Strip again”.

Boim’s remarks came at the sideline of an Israeli cabinet session Sunday.

The Israeli war general alleged that the planned Israeli invasion to the Strip means to prevent the transformation of Gaza Strip into new south Lebanon, and would allow Israel to control the Salahuddin axis in southern Gaza Strip to stop money and arms “smuggling” through Egypt.

In his statement, Boim hinted that the mutiny trend in Fatah led by Mohammed Dahalan was “carrying out a war against Hamas in Gaza Strip on behalf of the IOF troops”.

According to Israeli military sources, the Israeli occupation government pledged to provide Dahalan all the protection he needs, including using Israeli air force among other means, in case of serious Hamas threat against him.

Well-informed sources revealed that Dahalan’s mutiny trend in Fatah started execution of its part of the American conspiracy against the Palestinian national project, which was unveiled by former MI6 intelligence officer Alistair Crooke.

According to the British officer, the American scheme was run by William Abrams, the assistant of the US national security advisor with the aim to topple the current Hamas-led PA government through civil war.

Sources close to Dahalan have secretly revealed that he ordered his followers in the PA security apparatuses to inflame Palestinian internal front anew just few days before the national dialogue on unity government starts in Gaza city, especially that he rejected all pressures exerted on Abbas to accept unity government with Hamas.

Dahalan, moreover, is known for his public threats to any Fatah leader who considers joining any Hamas-led PA national coalition government.

He played a significant role in foiling an Egypt-sponsored prisoners’ swap deal between Israel on the one hand, and captors of IOF serviceman Gilad Shalit on the other hand, as he pledged to Israel to work for the release of Shalit in return for nothing.

Fawzi Barhoum, the spokesman of Hamas in Gaza Strip, asserted that Dahalan was implementing a US and Israeli-designed conspiracy that aims at dismantling the infrastructure of the Palestinian resistance, recognizing the Hebrew state, and accepting a Palestinian state with temporary borders that would bury the Palestinian question forever.

Armed wing of Hamas, the Qassam Brigades, meanwhile, warned that the mutiny trend in Fatah faction was conniving to drag PA security apparatuses into the marsh of civil war and bloodbaths, urging elements and leaders of those apparatuses to resist any attempt in this regard.

The armed wing, furthermore, underlined that it had never started any of the bloody incidents in Gaza Strip, and that it was always at the defense position, stressing that it will not allow American and Israeli projects in Palestine to succeed.

“We will not allow US secretary of state Condoleezza Rice to steer the Palestinian national affairs; and we shall not remain arms folded towards the crimes committed at the hands of USA and Israel agents in the Palestinian arena”, the armed wing affirmed in a statement it issued and a copy of which was faxed to the PIC."
Posted by Tony at 10:16 AM