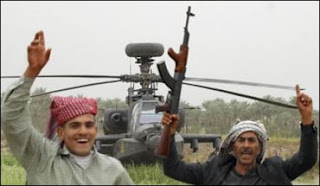 The U.S. officials could not say whether the AH-64 crashed or was brought down by insurgent fire or whether there were casualties.

An official with Iraq's Interior Ministry, however, said earlier Friday that Iraqi soldiers in Taji, about 12 miles north of Baghdad, reported a U.S. helicopter was seen going down after coming under insurgent fire.

Witnesses later told The Associated Press that the wreckage was spotted near a fuel storage complex in Mashhada, near Taji, and that U.S. troops had sealed off the area.

Nineteen Americans were killed in the three previous incidents....."
Posted by Tony at 8:01 AM