Abbas's popularity at its lowest ebb 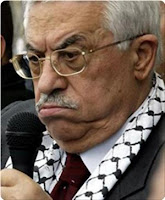 "RAMALLAH, (PIC)-- An opinion poll conducted by the website of the Palestinian Al-Quds newspaper has shown that PA chief Mahmoud Abbas's popularity was at its lowest ebb with only 13.47% voting for him as president if elections were held now.

The poll further said that if an honest election process was held Ismail Haneyya, premier of the caretaker government, would win 51.47% of the votes, which is 38% more than Abbas.

It further showed that Salam Fayyad, the premier of the so-called emergency government, would win the least of votes with 4.93%.

The paper is closely associated with the Fatah faction and the PA presidency."
Posted by Tony at 8:34 PM