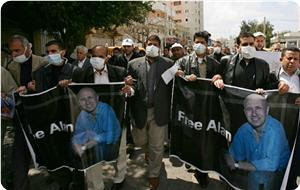 "GAZA, (PIC)-- Fawzi Barhoum, one of the Hamas Movement's spokesmen in the Gaza Strip, on Monday said that the kidnap of foreigners does not serve the Palestinian people's struggle against occupation.

Barhoum accused the so-called Army of Islam group, which kidnapped the British BBC reporter Alan Johnston, of smearing the Palestinian people's reputation and of seeking "to prove to the world that we are a group of militias that fight each other to gain personal ends".

In a press release, the Hamas spokesman asserted that Khattab Al-Makdesi, one of the leaders of that group, was arrested at dawn Monday after exchanging gunfire with a unit of the interior ministry's executive force. He added that Makdesi, which is not his real name, was heading that group that is "spreading fear" in civilian areas in Gaza.

He charged that the Army of Islam was still insisting on retaining Johnston in captivity even though it was against the higher interests of the entire Palestinian people.

Barhoum also charged certain security elements within the Fatah faction with financing this group with money and arms to ignite a new civil strife in Gaza, revealing that the Army of Islam was about to conclude a deal with Hamas to release Johnston but declined to go ahead in the deal after receiving threats from followers of Fatah MP Mohammed Dahalan, who is widely believed to be the main strife-monger in the Gaza Strip and who is currently living in Ramallah.

The PA interior ministry, for its part, said in a statement that a number of persons involved in the kidnap of Johnston were arrested on Monday, adding that the arrests were made after failure of all peaceful and negotiated efforts to secure the release of the British journalist."
Posted by Tony at 12:16 PM