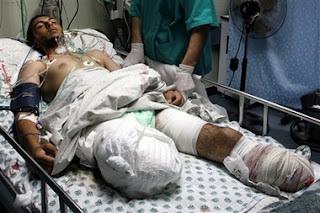 "JERUSALEM - Media advocacy groups condemned the shooting of a cameraman for Hamas TV who lay wounded on the ground when he came under more fire during a clash with Israeli troops.

The incident, captured by TV cameras, took place Thursday during heavy fighting between Hamas militants and Israeli forces in central Gaza. The cameraman, Imad Ghanem, had to have both legs amputated as a result of his injuries.......

The shooting was captured on film and broadcast on al-Jazeera satellite television, but the footage did not show who fired at Ghanem. However, Ghanem later said from his hospital bed the shots came from an Israeli tank.

On Friday, the Brussels-based International Federation of Journalists condemned the shooting and called for an investigation.

Two other media advocacy groups, the Committee to Protect Journalists and Reporters Without Borders, also have issued protests. "The Israeli military's repeated attacks on media and journalists during military operations are unacceptable and constitute violations of international humanitarian law," said Reporters Without Borders. The group demanded an investigation into why soldiers continued firing toward Ghanem after he had been injured.

The New York-based Committee to Protect Journalists also called for an investigation. "We are horrified by the Israeli forces apparent targeting of cameraman Imad Ghanem," the group's executive director, Joel Simon, said. "He was carrying out legitimate journalistic duties when he was seriously wounded. Deliberate targeting of journalists cannot be justified. We call on the Israeli army to investigate this incident fully and make its findings public.""
Posted by Tony at 2:19 PM