A PR coup for Hamas 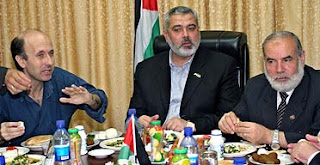 "Hamas has good reason to celebrate the release of Alan Johnston, for it demonstrates both to the Palestinians and the wider international community that, just three weeks after taking over, it can run the show in the Gaza Strip.

As the dramatic news broke there was already excited talk of the Islamist movement "proving its credibility" and of the hope that with Johnston now finally free, the siege on Hamas could be lifted too. If Hamastan is seen to be functioning, this line of thinking goes, then Hamastan can break out of its isolation. "We hope that order, security and an end to anarchy will also reach the West Bank," Mr Haniyeh said in a clear jibe at Mahmoud Abbas, the Palestinian president and Fatah leader.

The fact that Johnston's release has given Hamas a welcome bounce was reflected in the sour reactions from the Fatah camp in the West Bank, still stunned by its humiliating loss of Gaza last month......

Showing that it can deliver results in Gaza should help strengthen Hamas' hand in its attempts to restore some kind of unity - whatever angry Fatah officials say. Still, although Hamas is strong in parts of the West Bank it cannot make much more headway as long as the Israeli army and the Shin Bet secret service operate freely there. Renewed cooperation between the Israelis and Fatah intelligence- bringing furious charges of collaboration from Hamas - will doubtless make life harder for the Islamists.

Another positive sign in recent days is that Hamas in Gaza has begun drafting former members of the Fatah security forces, including those who used to work at the border crossings into Israel. Life, in short, has its own logic beyond politics......"
Posted by Tony at 6:39 AM