Running out of time in Iraq 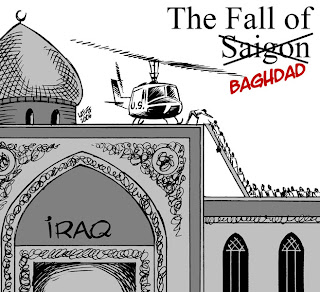 In Congress and beyond, Iraq is deemed to be such a mess that withdrawal is the only option.

By Simon Tisdall
The Guardian

"Opponents frequently accuse George Bush of being in denial over Iraq. But in recent weeks the dire urgency of the situation, in both Baghdad and Washington, appears to have penetrated even the insulating layers normally enveloping the Oval Office.

The White House is increasingly alarmed at the widely shared expectation that the progress report to Congress in September by the Iraq commander, General David Petraeus, and the US ambassador to Baghdad, Ryan Crocker, will mark the beginning of the end of the occupation.

The 29,000-strong military surge, ordered by Mr Bush in February, has already been written off as a failure.....

According to foreign policy analysts Steven Simon and Ray Takeyh in the Washington Post, "what the US needs now is a guide to how to lose - how to start thinking about minimising the damage to American interests, saving lives, and ultimately wresting some good from this fiasco"......

Mr Lugar said, in sum, that domestic divisions had already fatally undermined the surge. "The strident, polarised nature of this debate increases the risk that our involvement in Iraq will end in a poorly planned withdrawal that undercuts our vital interests."....."
Posted by Tony at 7:23 AM