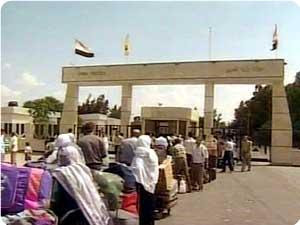 "RAFAH, (PIC)-- A number of Palestinians stranded at the Egyptian side of the Rafah crossing, in the southern Gaza Strip on Friday declared they are going on a hunger strike to protest the fact that their plight over the past twenty days was being ignored.

More than 6000 Palestinian passengers are stranded at the Egyptian side, many of them patients and they include women, children and elderly people. They are living in very harsh conditions as they have to sleep on pavements and are running out of money. Many of them are in need of medical attention.

The Israeli occupation authorities have closed the Rafah crossing since 19th June and only opened it for a short while on two occasions, to allow some deported Palestinians held at Egyptian ports to return to Gaza, and the second occasion was to allow representatives of Palestinian factions who were having talks in Cairo to return to Gaza. A part from that the crossing has been closed for normal passenger movement between the Gaza Strip and Egypt.

The Mizan human rights organization has issued an appeal for the crossing to be opened to end the plight of the thousands of stranded passengers, stressing that the organization has learnt of 14 deaths so far amongst the stranded passengers whose corpses were allowed to be transported to the Strip via the Karm Abu Salem crossing, but living people are so far not allowed to return.

The organization appealed to the international community to intervene and help end the plight of those Palestinians who are being subjected to a form of collective punishment by the Israeli occupation."
Posted by Tony at 12:27 PM