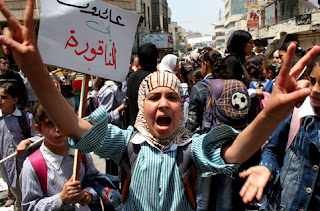 ".....This process begins with the dissolution of the Palestinian Authority. All Palestinians living under the 41st year of their occupation in the West Bank and Gaza must declare that they will no longer be a party to their own occupation. That they will not allow Israel to illegally withhold their tax revenues, while launching repeated incursions and invasions killing with virtual impunity. Nor will they permit representatives of their "government' to benefit financially and politically from Israel's occupation, from the construction of Israel's apartheid wall to the expansion of settlements on Palestinian land and the suppression of political activity. For American President George W. Bush's favored sons -- Mahmoud Abbas, Salam Fayyad, Mohammad Dahlan and their ilk -- to resign with what little dignity that remains and leave Palestine for whatever shore will take them, in order to allow a new PLO to emerge not tainted by the stench of corruption and collusion. Any government which is beholden to the financial and military support of its peoples' enemies is not deserving of either the title "Palestinian" or "Authority." Indeed, the time for this grotesque charade to end is now and it is long overdue.....

However, the Palestinians can no longer look toward the Arab world, the United States, the members of the European Union, or the United Nations for support or assistance. The historical evidence of the past sixty years clearly demonstrates that they have no interest in Palestinian-self-determination or a truly independent Palestine. Moreover, they have actively colluded with Israel and the United States to prevent both. Indeed, the plethora of failed "peace" initiatives, whose worthless papers could pave a road from Washington to Jerusalem and the fetid carcass of the "peace process" rotting on its shoulder, illustrates the utter failure and deliberate impotence of the international community to resolve the plight of the Palestinians. While individuals from these nations and bodies can and are welcome to assist, the Palestinians must liberate themselves. The Palestinian national movement, which once stood proudly along other national liberation struggles, cannot be allowed to end with a descent into factional fighting, war-lord fragmentation and chaotic rule of the gun. Failure to act quickly to reverse this course will result not in an independent Palestinian state or a "one state solution," but rather with Palestinians huddled into open-air prisons ruled by a web of collaborators with the support and legitimacy of the international community.....

Moreover, as demonstrated by recent events in Gaza and Lebanon, the Palestinian people remain surrounded by powerful enemies who are intent on their subjugation and defeat. As they did after 1948, the Arab governments are again actively suppressing Palestinian political activity, while publicly espousing the rhetoric of Arab unity and brotherhood. Meanwhile Bush's "vision" of a Palestinian state has proven to be a nightmarish, Guernica-like chimera whose abyss we are quickly sliding toward. We must not falter or tarry; the time for change has come. The revolution starts now or it won't start at all. "
Posted by Tony at 6:48 PM