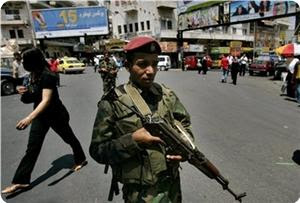 From Khalid Amayreh in East Jerusalem

"Israeli and Palestinian Authority (PA) security officials on Tuesday met in an undisclosed location, apparently for the purpose of coordinating activities against Hamas, Israeli and western news agencies reported. The meeting, which is likely to have taken place in West Jerusalem, is the latest in what one Palestinian official described as a flurry of joint activities in recent weeks.

An Israeli government spokeswoman confirmed that a meeting involving security officials from both sides took place on Tuesday. "The officials met in an undisclosed location on Monday to talk about how to move forward with security cooperation," said Miri Eisin, a spokeswoman for Israeli Prime Minister Ehud Olmert.

The talks reportedly centered on two main subjects, ensuring the safety of PA security installations and headquarters during Israeli incursions into Palestinian population centers, and the crackdown against Hamas.

Relations between Israel and the Ramallah-based Palestinian regime have improved dramatically since Hamas took control of the Gaza Strip on 14 January after routing and ousting forces loyal to former Gaza strongman Muhammed Dahlan. Since then the Israeli army and PA security forces have been carrying out separate but coordinated arrest raids targeting Islamic activists and supporters of Hamas. It is widely believed that hundreds of Hamas supporters have been arrested by both sides since the Hamas takeover in Gaza. Some of the detainees have been released.

On Monday, PA security forces arrested Ahmed al Haj Ali, a Hamas-affiliated lawmaker, in Nablus, along with a number of Islamic activists. The PA said it was trying to "dismantle Hamas's sleeping cells" in the West Bank in order to prevent the recurrence of what happened in Gaza in the West Bank. However, observers dismiss PA claims to that effect as sheer propaganda since the Israeli occupation army tightly controls the West Bank and has actually been hounding Hamas's political and other activists ever since the outbreak of the intifada nearly seven years ago.

Israel is detaining thousands of Hamas supporters and leaders in its dungeons and detention camps, which explains the fact that only second or even third-line Hamas members have been arrested by the PA.

The Associated Press reported Tuesday that Hamas supporters in the West Bank were being pursued both by Israel and by the new Palestinian government. Unnamed Palestinian security officials have confirmed that they are holding dozens of Hamas members in the West Bank, and dozens more have been arrested and released. Col. Maher Dwaikat, head of Palestinian Preventive Security in the West Bank town of Ramallah, told AP that his men had instructions to arrest armed members of Hamas. Some were arrested and released after having their weapons confiscated, Dwaikat said, while others remained in detention. However, Dwaikat's claims have not been verified by neutral sources.

Observers in Palestine believe that an increasingly public collaboration between Israel and the PA against Hamas is likely to cause irreparable damage to Fatah's image in the eyes of the Palestinian people.

However, for the time being, the PA doesn't seem much disconcerted about the impact of its close ties with Israel on Palestinian public opinion as its top priority now is to assert its authority vis-à-vis Hamas regardless of any consequences in terms of popularity and public image."
Posted by Tony at 8:24 PM