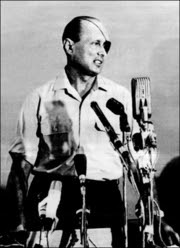 "JERUSALEM (AFP) - Israel destroyed more than 100 mosques in Palestinian villages incorporated into the state, including the site where the head of Imam Hussein was allegedly buried, a daily wrote on Friday.

According to archives quoted by the Haaretz newspaper, Israel's legendary general Moshe Dayan -- himself an avid amateur archaeologist -- gave the order to blow up the mosque while he was a young lieutenant colonel.

Haaretz said the Mashhad Nabi Hussein in Majdal, now Ashkelon, dated back to the 11th century and was where tradition had it that the head of Imam Hussein, killed in 680 by armies of the Sunni caliph Yazid in Karbala, was interred.

Around 9,000 Arabs who lived in Majdal fled during the 1948 Arab-Israeli war and 3,000 who remained in a ghetto were subsequently forced out by Israel.

The Mashhad Nabi Hussein mosque was blown up deliberately as part of a broader operation that included at least two additional mosques, one in Yavneh and the other in the nearby Mediterranean city of Ashdod, Haaretz said.

Of the 160 mosques in Palestinian villages incorporated into Israel under the armistice agreements, fewer than 40 are still standing, the newspaper quoted a Tel Aviv University study as showing.

Various holy sites were levelled despite protests from the then head of the Israeli antiquities department, Shmuel Yeivin, who believed that ancient sites and holy places needed to be preserved whoever they were sacred to."
Posted by Tony at 3:37 PM