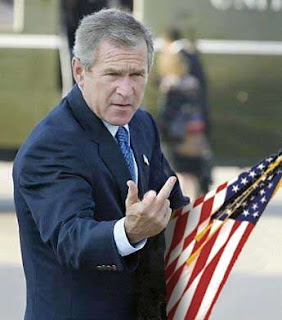 Libby pardon sends a message – and it isn't pretty…

"In commuting Scooter Libby's sentence so that the vice president's former chief of staff won't spend a minute in jail, the president is sending a message, one that, while going out to multiple recipients, consists of a sentiment succinctly summed up in two words: Screw you!

The first recipient is the general public, which is being disabused of the notion that America is a country without an aristocracy. As chief prosecutor Patrick J. "Bulldog" Fitzgerald averred: "It is fundamental to the rule of law that all citizens stand before the bar of justice as equals." Yet the commutation – and the Bushies still haven't ruled out a total pardon – tells a different story, one that presents a much more realistic picture of what life in post-9/11 America is all about......"
Posted by Tony at 2:22 PM