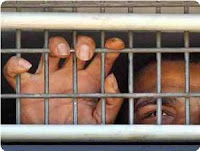 From Khalid Amayreh in East Jerusalem

"Israeli prison authorities have been carrying out a violent segregation of Palestinian political prisoners and detainees along political and factional lines, prisoners and human rights sources said Thursday.

According to “Abu Muhammed,” a prisoner leader at the notorious Ketziot detention camp in the Negev desert, Israeli soldiers and Shin Beth agents have been forcibly segregating prisoners, especially those affiliated with Fatah and Hamas.

“They are doing this by coercion and against the will of the prisoners. There are no problems between the prisoners who totally reject these provocative measures,” said Abu Muhammed (nom de guerre) in a telephone call....."
Posted by Tony at 8:43 AM