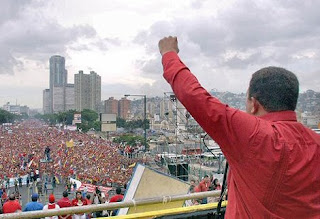 Buoyed up by oil revenues and popular support, Venezuala's president is busy building a global 'anti-imperialist' alliance. But is he pushing his luck?

By Dilip Hiro
The Guardian

"Buoyed by his re-election as president of Venezuela last December, and the continuing high price of petroleum in which his country abounds, Hugo Chávez is busily rallying countries opposed to United States' hegemony in world affairs. He is doing so while preparing Venezuelans to develop resistance war as an effective anti-imperialist tool to counter Washington's non-military campaign to overthrow his socialist government and seize Venezuela's vast oil resources - an assessment disputed by the Bush administration.

To further these broad objectives, he recently undertook a week-long trip to Russia, Belarus and Iran......

Little wonder that Chávez was warmly received in Tehran by President Mahmoud Ahmadinejad - with the Marxist Venezuelan leader swiftly adopting the local vocabulary of "American imperialism" and his hosts' specially coined term "global arrogance" interchangeably: "Cooperation of independent countries like Iran and Venezuela has an effective role in defeating the policies of imperialism and saving nations," he said. "The pillars of the global arrogance have become shaky."....."
Posted by Tony at 5:22 AM