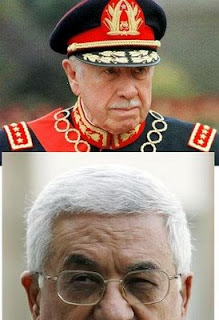 Meeting of emergency govt.: Dialogue with Hamas rejected; military courts to be initiated

"Ramallah - Ma'an – Palestinian Authority Chairman, Mahmoud Abbas has on Wednesday renewed his rejection of dialogue with the Hamas movement, dubbing them "the overthrowers in Gaza", and stated that "it is important to have international forces deployed in the occupied Palestinian territories".

Minister of information Riyad Al Maliki told Ma'an that Wednesday's cabinet session in Ramallah "was exceptional and was headed by Abbas, who confirmed that he supports the decisions of the emergency government, especially with regard to financial and security affairs."

Al Maliki also revealed that the government has decided to form military-style courts, a decision which will be presented to President Abbas for ratification. It is not known at this time which people may be tried through these courts......"
Posted by Tony at 9:45 AM