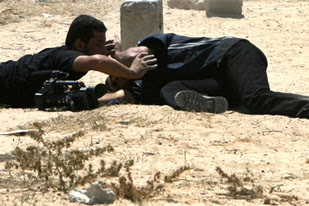 The assembly declared "the Israeli forces deliberately shot at the photographer, Imad Ghanim, injuring him in such a way as to necessitate the amputation of his legs."

In a statement issued on Thursday afternoon, the assembly stated that Israeli troops "noticed Ghanim, while he was wearing clothing marked "PRESS", but they shot at him, intending to kill him." The statement urged Reporters Without Borders and Amnesty International to intervene to stop the "Israeli attacks against Palestinian journalists, and to protect these journalists from the Israeli aggression."

Al Jazeera satellite channel aired footage of the incident involving Al Aqsa TV photographer Imad Ghanim. The film shows the cameraman falling after being shot, and then being hit by two more bullets as he lay on the ground.

Menawhile, the team reporting on the central Gaza invasion for the Al Arabiya satellite channel narrowly escaped death when Israeli forces opened fire at them, as events unfolded near Al Bureij refugee camp on Thursday.

Hanan Al Masri, reporter for Al Arabiya, told Ma'an "the Israeli forces shot intensively at the team, although there was no reason to do so." She added that she and her team, in addition to three from Reuters, "were forced to hide in one of the houses because the Israeli forces continued to shoot at them, destroying some of the technical devices, as well as the water tanks of the house we sheltered in." "
Posted by Tony at 12:38 PM