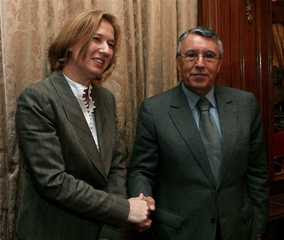 Look Ma: Another Arab Eunuch in the Bag!

"PARIS --The foreign ministers of Israel and Morocco held their first publicly disclosed talks in years Wednesday, with the Israeli-Palestinian conflict at the heart of the discussion.

The Moroccan minister, Mohamed Benaissa, did not speak to reporters after the meeting, but shook his Israeli counterpart Tzipi Livni's hand for the cameras. In the background, members of the Israeli delegation unwrapped gifts of gold pens they said were given to them by the Moroccans......

In her remarks to reporters - she took no questions - Livni did not specifically address the issue of Israeli ties with Morocco, a U.S. ally.

But she said that Israel and moderate Arab nations including Morocco share common interests. "We have the same concerns, we face the same threats, and so we want to see a process in place so we can move forward," she said.....