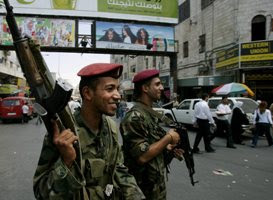 "In an effort to quash Hamas in the West Bank, Fatah security forces recently arrested dozens of members of the Islamic group in the area and confiscated a considerable amount of weapons, a senior Palestinian official told Haaretz Tuesday.

The Hamas detainees revealed during questioning that their organization had been establishing sleeper cells of the group's "executive force" in the West Bank, the official allied to Palestinian Authority Chairman Mahmoud Abbas reported.

"They had an organized chain of command, weapons, they even trained in various places," he said. "We are currently working toward dismantling the Hamas infrastructure in the West Bank." He added that the West Bank security forces intend to continue battling the establishment of a Hamas network in the area.

The official said that the arrests were not coordinated with Israel, and that Israel had no knowledge of the extent of the militant Hamas presence in the West Bank......"
Posted by Tony at 4:59 AM