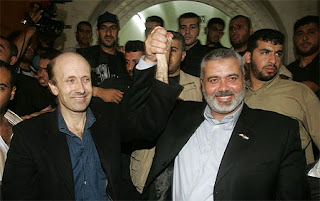 For Hamas, a lot was riding on the fate of the BBC's Alan Johnston. The question now is what political capital can it make from his release.

By Conal Urquhart
The Guardian

".....But Alan's case was just a symbol of a broader message that Hamas wants to send out to the international community and Israel. This is that they can impose peace and security and be trusted to carry out their commitments if they are addressed directly......

Their success in securing the release puts into sharp focus the failure of their Fatah counterparts to have any effect on the kidnappers. In a telling comment, Alan described how his kidnappers were "comfortable and secure" until Hamas took control. Then they became "very nervous", and he felt for the first time there was light at the end of the tunnel.

The effectiveness of Hamas has long been recognised by the highest echelons of the Israeli army. Senior officers have commented in private that they would trust Hamas to live up to any deals that were made between them. However, dealing with Hamas is a political step the Israeli government is not yet ready to take......

Since Hamas took over the Gaza Strip, it has once again taken the appearance over a secure place. Its police officers man the junctions and rapid response units are rarely far away. They appear more effective and threatening than their Fatah counterparts, who could not even manage the traffic.

Mahmoud al Zahar, the Hamas foreign minister and probably the most senior Hamas leader in Gaza, this morning promised a new era in the Gaza Strip. "Every kidnapping, every illegal behaviour, we will fight with all our force, the force of law, the force of moral principles. Every Palestinian and every foreigner will be secure and safe regardless of their political beliefs," he said......"
Posted by Tony at 7:08 AM