The Peril of the West’s Hamas Error 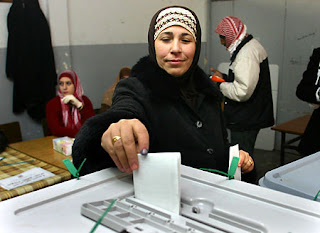 "First, it’s worth noting that the whole idea that Palestinian “moderates” are being bolstered in order that they will make peace with Israel is just a PR line, or a rather sick joke......

.....The idea that the West is backing Fatah as a moderate force for achieving Palestinian national goals is equally derided on the Palestinian side. They know all too well that the regime of Mahmoud Abbas is being boosted in order that it can more effectively play the role of gendarme, eliminating threats to Israel and policing the status quo. Israel simply has no intention of withdrawing to its 1967 borders; there is no “political horizon” to rationalize this policing role, it is simply an end in itself.

Many even in Fatah recognize that what Mahmoud Abbas has signed on for has nothing to do with ending the occupation. That’s why he had to sack his senior presidential adviser Hani al-Hassan last week. Hassan had pointed out that Hamas was not fighting Fatah as a whole when it took over Gaza, but rather a group within Fatah that was collaborating with outside forces against Palestinian interests......

This is only the beginning of the revolt that Mahmoud Abbas is going to face from those within Fatah who believe nothing good will come of the organization throwing in its lot with the Americans and Israelis.....

But the breakdown of the Palestinian Authority and the prospect for a two-state solution is only a part of the collateral damage from this reckless U.S. policy promoted by the unchecked extremism that has shaped the Bush Administration’s policies in the Middle East. Crooke is the first analyst I’ve read situating the fate of Hamas in a regional dynamic — as Washington has failed to comprehend — in which Islamism is the dominant political dynamic, and will remain so for the foreseeable future.......

The problem for Hamas is that its constituency – the rank and file – and the wider Islamist movement have now embarked on a period of introspection. What is apparent – and this can be ascertained on any number of Islamist websites – is that the mainstream Islamist strategy of pursuing an electoral path to reform is now being questioned. This will have an impact well beyond Palestine – most obviously in Egypt and Jordan......

If the Islamists are denied a political role, there is, in fact, no prospect for democracy in the Middle East — as the Palestinian experience has now graphically demonstrated. The pro-Western regimes can survive only by repression and patronage, and the momentum is against them. All that Mahmoud Abbas has succeeded in doing in the past month has been to irreversibly associate the PLO leadership with the decrepit autocracies of the region to which it once presented itself as a revolutionary alternative to appealed to the Arab street, not only because of the plight of the Palestinians, but because of the nature of their own regimes. The result has been, in an epic sense, to “blow an opportunity.”......"
Posted by Tony at 8:47 PM