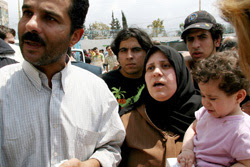 "BEIRUT, 4 July 2007 (IRIN) - The demining agency tasked with neutralising unexploded ordnance (UXO) from the six-week conflict between militants and the Lebanese army in the Nahr al-Bared Palestinian refugee camp has said the removal of immediate UXO threats will take at least a month.

This raises the spectre of further unrest among displaced refugees increasingly desperate to return home.

“The operation should take around four weeks to eliminate the immediate threats, but there is bound to be UXO still found,” David Horrocks, Lebanon Country Programme Manager for the Mines Advisory Group (MAG), told IRIN.

“It is going to be very difficult to stop people going back, and it’s important we let the Palestinians know they are returning. But our concern is that the more people who go back the more difficult our job becomes.”

Nearly 35,000 Palestinian refugees have been displaced since the 20 May outbreak of conflict in the northern Nahr al-Bared camp, near Tripoli. The vast majority have settled with families or are temporarily sheltered in cramped, fraught conditions in neighbouring Beddawi camp......"
Posted by Tony at 1:28 PM