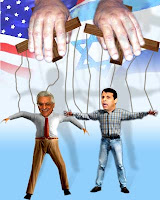 "Israeli military forces invaded the Northern West Bank city of Nablus early on Wednesday and shut down several media offices and agencies in what is considered the most violent direct action against Palestinian media since the beginning of the al Aqsa intifada.

Local sources reported that military forces invaded the city at around 1.00 am and forcibly entered the offices of several organizations, confiscating property.

Issa Abu Al Ez, director of Afaq TV station in Nablus, reported that the invading troops assaulted an employee of the station who was on duty at the time of the raid, before confiscating broadcasting equipment and computers.

Following the raid they army issued the station with a closure notification. The notice was written in Hebrew and Arabic and signed by Israeli army chief, Jadi Alof. It demanded the closure of the TV station and all its branches, with a right of appeal within 14 days.

The military claim the closure was due to illegal activity being conducted at the station which the army views as a terrorist group, loyal to Hamas, Islamic Jihad and other terrorist organizations.

According to the same sources the military attacked other media offices named "An Najah press" and "Al Ruwad press", where they confiscated computers and documents.

Hamas sources stated that the media organizations which were targeted last night had previously undergone similar attacks from armed forces loyal to the Fatah movement including attacks on the Afaq station in February 2007 and on An Najah and Al Ruwad in June 2007."

Israel and its Palestinian Lahad collaborators are taking turns in suppressing Palestinians in the West Bank; isn't this partnership sweet? Isn't this what "peace" is all about?
Posted by Tony at 5:42 AM