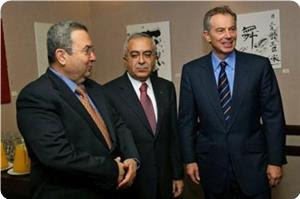 "OCCUPIED JERUSALEM, (PIC)-- Israeli war minister Ehud Barak on Thursday briefed Salam Fayyad, the premier of the illegal PA government in Ramallah, on latest measures taken against the Gaza Strip in the presence of Tony Blair the international quartet committee's envoy to the region.

Hebrew press reports said that Barak spoke about the mini Israeli cabinet's decision on Wednesday that stipulated tightening the noose on Gaza and reducing further the quantities of fuel channeled to the Strip, which were already slashed a few weeks ago.

The meeting came less than 48 hours after Barak's forces killed six Palestinians in southern Gaza......"
Posted by Tony at 11:46 AM