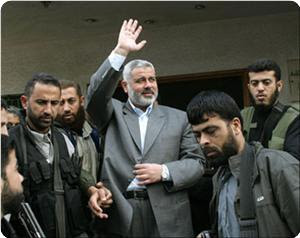 General (Reserve) Dany Rothschild opined in an interview with the Israeli army radio that assassinating Haneyya would constitute a suitable response to the continued firing of locally made resistance missiles from the Gaza Strip.

He said that Israel should target the decision-makers starting with Haneyya and not only the cells that are firing those crude rockets.

Rothschild opined that any IOF incursion into the Strip would not endanger the life of captured IOF serviceman Gilad Shalit, who has been held in Palestinian resistance hands for more than 16 months.

For his part, Moshe Kaplinski, the deputy chief of the IOF general staff, said on leaving his post that the army might be "compelled" to occupy a number of areas in the Strip for months.

He told Hebrew daily 'Yedioth Ahronoth' that the policy of "self-restraint" should come to an end and the land operation into Gaza was only a matter of time."

He should stop waving and instead take the threat seriously; the Zio-Fascists don't distinguish political leaders from the resistance. Even crippled Sheikh Yassin was not spared.
Posted by Tony at 11:07 AM