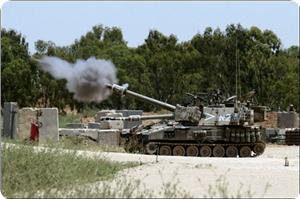 "GAZA, (PIC)-- Military analysts hosted by the Israeli 10th TV channel admitted that that an RPG shell fired by Palestinian resistance fighters during the Israeli incursion last Tuesday into the Fakhari village managed to penetrate the fortified body of a Mirkava tank which is considered an object of pride for the Israeli military industries.

An Israeli specialist in military affairs said that the Palestinian resistance in Gaza fired a new upgraded type of RPG shells, pointing out that the RPG penetrated the tank and exploded inside it wounding four Israeli soldiers.

The Qassam Brigades, the armed wing of Hamas, had claimed responsibility for firing the RPG which resulted in the injury of four Israel soldiers.

The military analysts also admitted that Palestinian resistance in the Gaza Strip achieved "a quantum leap" in its confrontations with the IOF troops."
Posted by Tony at 10:23 AM