Scapegoats in an Unwelcoming Land 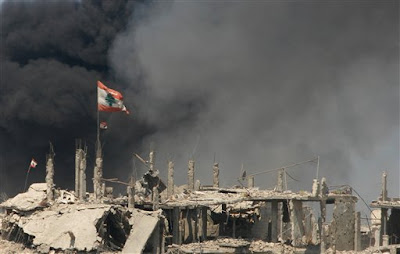 A Must Read Piece
By Nir Rosen

".....Hajj's forces responded by indiscriminately bombarding the camp in the name of the war on terror, and the Lebanese public rallied 'round.

Palestinians had once again become Lebanon's scapegoats, victims of a land in which they have long faced slaughter and discrimination. Attacking them may be personally risky, but it's also often good politics; the assassinated general's boss, army commander Gen. Michel Suleiman, is poised to become Lebanon's next president. Suleiman isn't the first army commander to punish the Palestinians, and he won't be the first president to do so, either. Between 1958 and 1964, President Fuad Shehab created an elaborate, ruthless secret-service network to monitor the Palestinian camps. During his 1970-76 reign, President Suleiman Franjieh clashed militarily with Palestinian factions, even using the air force to bomb a neighborhood thought to be pro-Palestinian. I've heard followers of assassinated president-elect Bashir Gemayel, whose Maronite Christian militia massacred Palestinians in 1976, brag that he was stopped at a checkpoint in the early years of the country's 1975-90 civil war with a trunk full of the skulls of dead Palestinians. Even today, the Lebanese opposition's preferred candidate for president is Michel Aoun, a Christian retired general who also participated in the 1976 killings......

When about 1,000 families finally passed through the checkpoints, to the jeers of soldiers and demonstrators, they found only destruction. Every single home, building, apartment and shop that I saw had been destroyed. Most buildings had been burned from the inside; the signs of the flammable liquids that the soldiers had used were scorched on the walls, and empty fuel canisters were strewn on the floors. Ceilings and walls were riddled with bullets, shot from inside, seemingly for sport. Most homes that I saw had been emptied of furniture, appliances, sinks, toilets, televisions and refrigerators. Most shockingly, soldiers had defecated in kitchens and bedrooms, on plates, bowls, pots and mattresses; they had urinated into olive-oil jars.

The media were not permitted in, and most Lebanese outlets ignored or denied the outrages. When I managed to slip inside, I was shocked by the scope of the damage. The buildings were crumpled, windows broken, electrical wiring yanked out, water pumps destroyed, generators stolen or shot up. All the gold jewelry had been stolen, as had been the cash that so many Palestinians had stored in their bedrooms. Insulting graffiti were scrawled on the charred walls, as were threats, signed by various Lebanese army units. Every car in the camp that I saw had been burned, shot or crushed by tanks or bulldozers. The ruination had been strikingly personal; I saw photo albums that had been torn to shreds. Palestinians told me that they had seen their belongings on sale in the main outdoor market in Tripoli.

Like all institutions in Lebanon, the army is sectarian, a fact that helps explain the devastation. Most of the soldiers fighting in Nahr al-Bared had been Sunnis from northern Lebanon; the Sunnis had once seen Palestinian militias as friendly, but now they blamed the Palestinians for the outsiders of Fatah al-Islam and unleashed their fury on the camp. By contrast, refugees told me, Shiite soldiers from the south had been far kinder and more supportive after the fighting......."
Posted by Tony at 12:49 PM