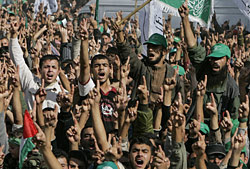 "At least 300,000 Palestinians rallied in Gaza City on Saturday to mark the 20th anniversary of Hamas's founding, as deposed Palestinian prime minister Ismail Haniyeh promised Hamas would not succumb to international pressure.

The central square in Gaza City was awash with green flags and dozens of armed, masked men from the group's military wing patrolled. Some estimates put the crowd as high as 500,000.

"The message from you today is that Hamas and these masses will not yield before the sanctions," Haniyeh told the cheering onlookers. The crowd shouted in response, "To you, we come Haniyeh."

"Today is the day of Jihad, resistance and uprising," he said. "Those who remain committed to the constant rights of their people, those who make an enemy of America and the Zionist occupation [Israel] gain popularity. This is Hamas."

Haniyeh lambasted the renewal of peace talks between Israel and Palestinian President Mahmoud Abbas' administration in the United States last month, warning they will not bring about a cessation of Israeli settlement construction or yield any other Israeli concessions.

"As for the fruits of the other track, the track of negotiations, normalization and bargaining, all can see that it is the consolidating of settlements ... injustice and oppression for the Palestinian people," Haniyeh said. "It is bitter fruits."......

Large pictures of Hamas' leaders, both in Gaza and in exile, were draped across the speakers' podium. A black banner hanging from a nearby building read, in Arabic, English and French: "We will not recognize Israel."

"This is the real referendum on the popularity of resistance, the people converging behind Hamas," said Zayed Herzallah, a 28-year old merchant, who brought a van full of young relatives. "Hamas today, after 20 years and after thousands of martyrs, is graduating the fourth generation (of supporters)."

In the crowd were about 50 female members of Hamas' military wing, dressed in long robes and sporting military-style ammunition vests. Some covered their faces with veils, others with ski masks. Several took to the stage, waving green Hamas flags......"
Posted by Tony at 4:28 PM