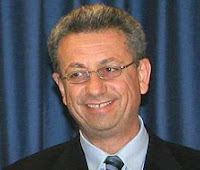 Palestinians Cannot Abandon the Rights of Our People

"As one who for decades has supported a two-state solution and the nonviolent struggle for Palestinian rights, I view the recent conference in Annapolis with a great deal of skepticism - and a glimmer of hope.....

Our movement's firm commitment to democracy and nonviolence can be seen, for example, in our peaceful demonstrations against Israel's apartheid wall. For more than two years, we supported the popular - and, so far, successful - struggle of the West Bank village of Bilin to remove the wall from its land. We are replicating these nonviolent activities, with the support of international solidarity groups, in towns and villages throughout the West Bank....

....The number of Israeli settlers in the West Bank, including occupied East Jerusalem, has grown from 268,000 to more than 420,000 since the Oslo peace accords were signed. Even today, Israel is refusing its commitment, under the U.S.-sponsored "road map" to peace, to freeze all settlement activity......

And a meaningless and empty state is no basis upon which to build substantive peace. A state in name only will not be enough. A state requires sovereignty. A state requires free movement and a free economy. A state requires a democratically elected government that can govern independently, without interference from Israel....."
Posted by Tony at 10:12 AM