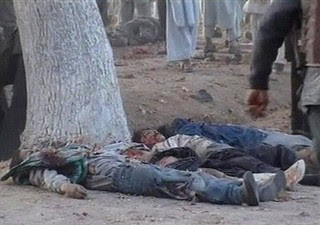 by RAWA
(Revolutionary Association of the Women of Afghanistan)

"The US and her allies tried to legitimize their military occupation of Afghanistan under the banner of “bringing freedom and democracy for Afghan people”. But as we have experienced in the past three decades, in regard to the fate of our people, the US government first of all considers her own political and economic interests and has empowered and equipped the most traitorous, anti-democratic, misogynist and corrupt fundamentalist gangs in Afghanistan......"
Posted by Tony at 1:30 PM