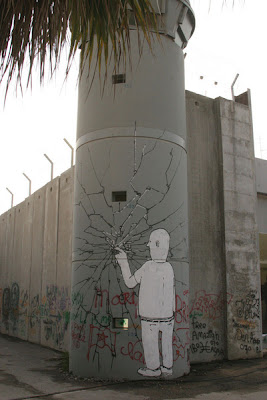 ".......This is "Santa's Ghetto," an ongoing collaborative graffiti project that has evolved into the biggest artistic assault on Israel's separation barrier and the latest hope among Bethlehem's leaders to draw tourists back to this troubled town during the Christmas season.

Led by the enigmatic British artist known as Banksy, painters from around the world are adding works daily to the walls around Bethlehem in an attempt to draw attention to the impact the separation barrier has had on life in the Biblical birthplace of Jesus Christ......."
Posted by Tony at 3:27 PM