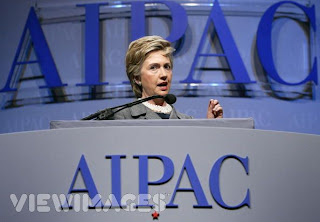 "While much attention has been given to Senator Hillary Clinton's support for the U.S. invasion of Iraq, her foreign policy record regarding other international conflicts and her apparent eagerness to accept the use of force appears to indicate that her fateful vote authorizing the invasion and her subsequent support for the occupation and counter-insurgency war was no aberration. Indeed, there's every indication that, as president, her foreign policy agenda would closely parallel that of the Bush administration. Despite efforts by some conservative Republicans to portray her as being on the left wing of the Democratic Party, in reality her foreign policy positions bear a far closer resemblance to those of Ronald Reagan than they do of George McGovern......"

"Public opinion polls have consistently shown that the majority of Americans – and even a larger majority of Democrats – believe that Iraq is the most important issue of the day, that it was wrong for the United States to have invaded that country, and the United States should completely withdraw its forces in short order. Despite this, the clear front-runner for the Democratic Party nomination for president is Senator Hillary Clinton, a strident backer of the invasion who only recently and opportunistically began to criticize the war and call for a partial withdrawal of American forces......"
Posted by Tony at 5:01 AM