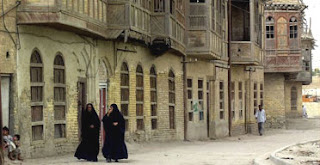 After the invasion of Iraq, the US government claimed that women there had 'new rights and new hopes'. In fact their lives have become immeasurably worse, with rapes, burnings and murders now a daily occurrence.

"They lie in the Sulaimaniyah hospital morgue in Iraqi Kurdistan, set out on white-tiled slabs. A few have been shot or strangled, some beaten to death, but most have been burned......

"It is getting worse, especially the burnings," says Khanim Rahim Latif, the manager of Asuda, an Iraqi organisation based in Kurdistan that works to combat violence against women. "Just here in Sulaimaniyah, there were 400 cases of the burning of women last year.".....

"In many cases the woman is accused of adultery, or of a relationship before she is married, or the marriage is not sanctioned by the family," Khanim says. Her husband, brother or another relative will kill her to restore their "honour". "If he is poor the man might be arrested; if he is important, he won't be. And in most cases, it is hidden. The body might be dumped miles away and when it is found the family says, 'We don't have a daughter.'".....

Even under Saddam, women in Iraq - including in semi-autonomous Kurdistan - were widely recognised as among the most liberated in the Middle East. They held important positions in business, education and the public sector, and their rights were protected by a statutory family law that was the envy of women's activists in neighbouring countries. But since the 2003 invasion, advances that took 50 years to establish are crumbling away. In much of the country, women can only now move around with a male escort. Rape is committed habitually by all the main armed groups, including those linked to the government. Women are being murdered throughout Iraq in unprecedented numbers.

In October the UN Assistance Mission in Iraq (Unami) expressed serious concern over the rising incidence of so-called honour crimes in Iraqi Kurdistan, confirming that 255 women had been killed in just the first six months of 2007, three-quarters of them by burning......"
Posted by Tony at 7:59 AM