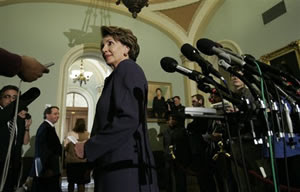 "When the CIA destroyed those prisoner interrogation videotapes, was it also destroying the truth about 9/11? After all, according to the 9/11 Commission Report, the basic narrative of what happened on that day comes from the CIA’s account of what those prisoners told their torturers. And what about those congressional leaders, including Democrats such as Nancy Pelosi, who were briefed on the torture program as early as 2002?....."
Posted by Tony at 5:35 AM